The dark side of America.

This is going to be a bit of a rant, so forgive me.

The United States has had its problems since its conception. From slavery, to the great depression, to pretty much spawning ISIS. Though, I’m not here to talk about how we thwart leaders in other countries, and arm rebels that end up eventually using those weapons on our soldiers, or how we police the world in general. Instead, I am here to talk about Reagan and his trickle down economics.

Everyone remembers the Reagans fondly, and some even think he was the best president in the last fifty years. However, his plans ruined our economy. See, the point of trickle down economics was that they could give huge incentives and tax breaks for people that owned large businesses and the people on Wall Street. That extra money was supposed to trickle down to the middle to lower class, ensuring that everyone got a piece of the pie. That’s not what happened, though. Instead, those companies kept the money, gave themselves bonuses and found ways to outsource most of their work, creating a huge wage gap between themselves and the middle class.

That’s how the 1% got to where they are. It’s not because of Bush, Obama, or Clinton. People like to scream and shout, blaming their situation on whoever is in the White House at the moment, instead of taking a step back and seeing when and how this all started.

To make matters worse, in the last century, all focus was on factory work. Schools began and even the media started prepping us for factory work our whole lives. In the last century, it might have been necessary, and of course, those jobs are still important. However, thinking outside of the box has always been frowned on in our society. Real men get out there and bust their asses, right? They work from sun up until sun down, because that’s what MEN do. That narrative is great, when your country desperately needs factory workers and people who do manual labor, but we have enough of that now. Most of it is outsourced to other countries anyway where they will work for a potato and nickel, and everyone is okay with that, except for the “they’re taking our jobs!!” people. Which, I’d love to see them stitching together Nikes eighteen hours a day and then ask them how they feel about outsourcing.

What we need now is innovators, artists, creators. We need scientists. That’s what our country was founded on, and how our industrial revolution began. Sure, we need the laborers to make the ideas a reality, but we need the free thinkers to have the ideas to begin with, or nothing moves forward. Society needs to stop emasculating men that work in science or the arts, and treating creative people as if they don’t even have a job. It only shows ignorance, and shows how well that narrative has been ingrained into our society. I’m sure at a time that smoking cigarettes made you a “real man,” because if a cowboy does it, well they’re the most manly of manly men possible. Right? It’s marketing.

Our society does need laborers, of course, but right now, we need leaders in science more. Our government spends more money on our military than the next seven largest militaries combined. 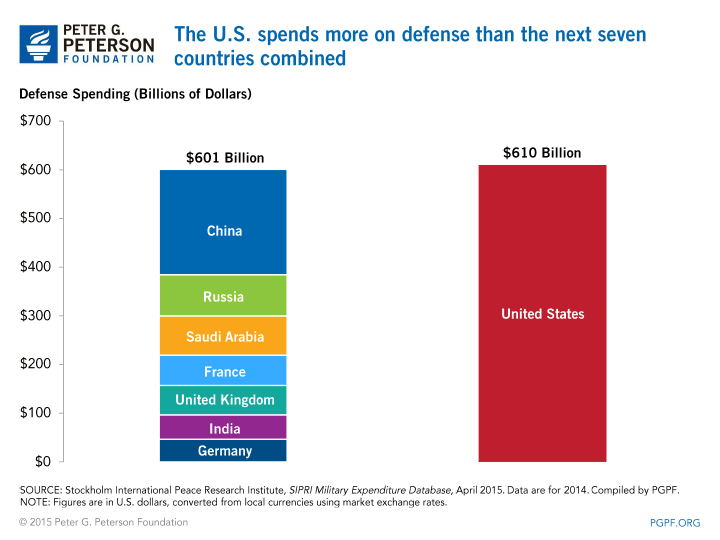 While spending our spending on NASA is less than 1%. Even though NASA is responsible for the progression of a ton of technology we use today, and makes our lives better overall. For every dollar spent on NASA, it returns fourteen to the economy. What’s wrong with that picture?

There is a premium on grunt work over creativity, and the reason for that is, that the 1% controls the media. Creativity=Competition while Laborers=Continued success for the 1%.

Why is it that laborers can make $30 bucks an hour just a couple years in with no debt, but people in the science or medical industry start at entry level positions with more debt than they can even repay?

Another horrible thing about the Reagans, was Nancy’s war on drugs. If we were able to decriminalize drugs, maybe we could tax it and have new jobs in our country. Not only that, but we might be able to fund things like the science and medical industries. Shit, we may even be able to figure out this whole newfangled “universal health care” thing that virtually every first world country except us has, because hooray capitalism! How about instead of doing something ridiculous like building a wall, why don’t we decriminalize narcotics and have it federally or state regulated which would take the air out of the cartel’s tires? They’d have to find new work, or sell to other places. If you think this won’t work, take a look at Portugal, they decriminalized and their crime dropped dramatically. There are people spending more time in prison for selling pot than people that have raped women. What’s wrong with that picture?

So many people hate the idea of taxes, and are worried about what their money is going to. Well, it’s feeding guys that got caught smoking or selling pot while they twiddle their thumbs in prison.

Obamacare is shit, and too expensive for the people its meant to help. Should we do away with it? No. That’s stupid. That would take benefits from people that are using it. Instead, we need to reform it, and reallocate funds. Why can literally every other first world country give their citizens access to medical treatment except us? It’s disgusting. It’s because we are capitalists, and we put a price on everything, even human life. Sure, communism typically fails, but maybe capitalism just takes a little longer to fail. Couldn’t we find a middle ground?

We need a universal healthcare plan, with an emphasis on women’s health, and mental health. Perhaps then, we wouldn’t have lone gunmen taking out nightclubs. Sure, it would still happen because people are flawed, but if we could stop it more often, and understand the motivations that drive it, the world would be a little safer. Instead of just blaming it on ISIS or some other entity. ISIS is just a passing thought in history, and soon they will be gone, but our healthcare problem will still be here.

We need more funding for science, so that we can improve our overall lives. Science doesn’t discriminate, and doesn’t care how much money you have. Science helps us all, and advances us towards something better.

Basically, we just need to get our shit together, and worry about more than the here and now. Fuck Trump and Hillary. They’ll be gone soon and we’ll be voting on a new set of shit bags that will deliver false promises. We just need to focus, and stop feeding into the media frenzy. Stop giving power to things that don’t matter, only then, can we have a voice, and possibly change things that do.

0 Replies to “The dark side of America.”