How gaming has made me a better author.

Gaming is what got me into writing. I know it sounds weird, but hear me out. Gaming has come a long way since the days of “Space Invaders.” I know a lot of you older people that are probably reading this see games as a waste of time, or maybe something you’re too old to get into. Some may even think that games lack focus, or even a point. Just another time waster. The truth however, is far from that. Games have evolved, and not only are some of the plots deeper and larger than some movies and TV shows, but you’re immersed in it as well. You get to see these worlds through the eyes of the character, hearing what they hear, feeling what they feel. Any decision you make can affect the outcome of the game. When I first started writing, it was because I was between games and had a long time to wait for the next in the series. So, I joined a text based role playing group centered around the game’s lore. That’s when I realized I wanted to be an author, I had a knack for it. So, I have put together a list of things I have learned from video games that you might all enjoy, and hopefully learn from. =)

1. They open your mind to new worlds, complex ideas, social structures, and lore.

Lore is basically a history of a fictional universe, world or culture that gives context to said fictional universe. Before I started gaming, I probably wouldn’t have thought that lore was too important. I mean, if I write a vampire book about a group of vampires hanging out with a human lady, who needs lore, right? I mean, everyone gets the point. Well, wrong. Writing the lore, or having it to fall back on not only gives you a way to sprinkle in depth and context into a story, but makes writing a sequel easier. You already have a list of known rules for your world, so sticking to that guideline makes it a little easier because the possibilities aren’t endless. So your vampire sparkles, cool. I want to know why, and so does everyone else. Having something happen just for the sake of having it happen irritates people. Finding out vampires sparkle in book three because the first vampire was cursed to never go into the sunlight, otherwise they become a beacon to hunters would give it a little more context, and make it fun. Especially when people realize you decided that before the first book was even written. It just makes writing easier because you have something to fall back on when you get stuck. If all vampires in your world sparkle, or can see through walls, you might approach a situation differently, or it may spark some creativity.

The game “Mass Effect,” taught me about building complex social structures. You take an entire universe of different races, mix them all together, and of course you get conflict. We have a ton of racial conflict here on Earth and we are all the same species. Think about it. Back to lore, having an entire written history of each alien race will give you an idea of how one alien race would react when exposed to another alien race that you have a written history for. You don’t have to wing it. Mass Effect nails this, and you really feel like you are there. Some other games that do this are: The Elder Scrolls, Dragon Age, Fallout, etc. In The Elder Scrolls, not only do you interact with hundreds of characters and learn about their pasts, ideologies, and goals, but you can pick up books in game that actually have histories of kings, countries, fables and legends. So, it’s awesome to see a lizard race walking around and drinking this weird potion that no other race really drinks, and you sit there wondering why for days… Then you come across a book that talks of a tree that they worship that produces a sap that connects them like a hive mind. It’s just cool to have little stuff like that, and our books are no different.

2. They help you learn the importance of side stories and sub plots that matter, and the frustration of filler.

One thing that most gamers cannot stand, is when a game deviates from the original story to do some bullshit fetch quest that serves no other purpose that to make the game seem bigger or longer. This drives me absolutely nuts, so I never do it to readers. Filler in books is just that, filler. A great editor will cut out most of your filler and just leave you with actual story, but I know a lot of people have no idea what to cut. Sometimes in a game, you have to stop the plot mid story to go fetch a magic pair of slippers for a random person that has no involvement with the plot, just to earn a little more experience. Now, is this relevant to the game? Of course not. Not only does it feel like a chore to do, but it completely derails the momentum the story had going for it. I see this happen in books as well. So, your vampire is on the way to kill the leader with the rest of their group, do they really need to stop at Waffle House on the way to get coffee and talk about their day? No, you just killed the excitement and momentum the story had going for it. Now, a good side story will always add to the story and tie into the main plot. Those are enhancing, but you need to know how to execute it. Let’s say your vampire and their group are headed to kill the leader, but you have a chapter where another group of vampires are going for the only weapon that will kill him and eventually meet up with the main character, it adds depth. Just don’t forget to write the lore for that weapon. Why does only that weapon kill him? What’s the story there?

3. You learn that you need some assholes or villains thrown into the mix to keep stuff interesting.

Yes men are boring. I’m sorry. Games like Mass Effect and Dragon Age, you have a team of companions and one of the best parts about it is when you have to make a tough call and half of them love you for it and the other half hate you for it. Adds weight to the plot and also depth to their characters. Your side characters need to have a depth to them that allows them to react to people and situations in their own way. Not everyone will agree with your protagonist, and not everyone will like each other. Some decisions your protagonist makes may cause a few of your other characters to leave the party.  Just like in real life, we all make mistakes, and sometimes you will do things that might end a friendship. People in your books should be the same way. If everyone always just goes along with everything your protagonist says, it will get predictable and boring.

4. You learn to find bright and humorous moments even in stories set in gloomy places and can appreciate that, so you work them into your own books.

I get it. If you write a gloomy or spooky book, you have a theme, right? So at times you may feel that deviating from that would spoil the book. However, real people laugh in the most uncomfortable situations, and humor makes life easier. A little bit of comic relief in an otherwise terrifying tale also adds depth to your characters, and shows a different, more human side to them. It makes them easier to relate to, and helps you see things from their eyes.

I’m sure you have read this before: 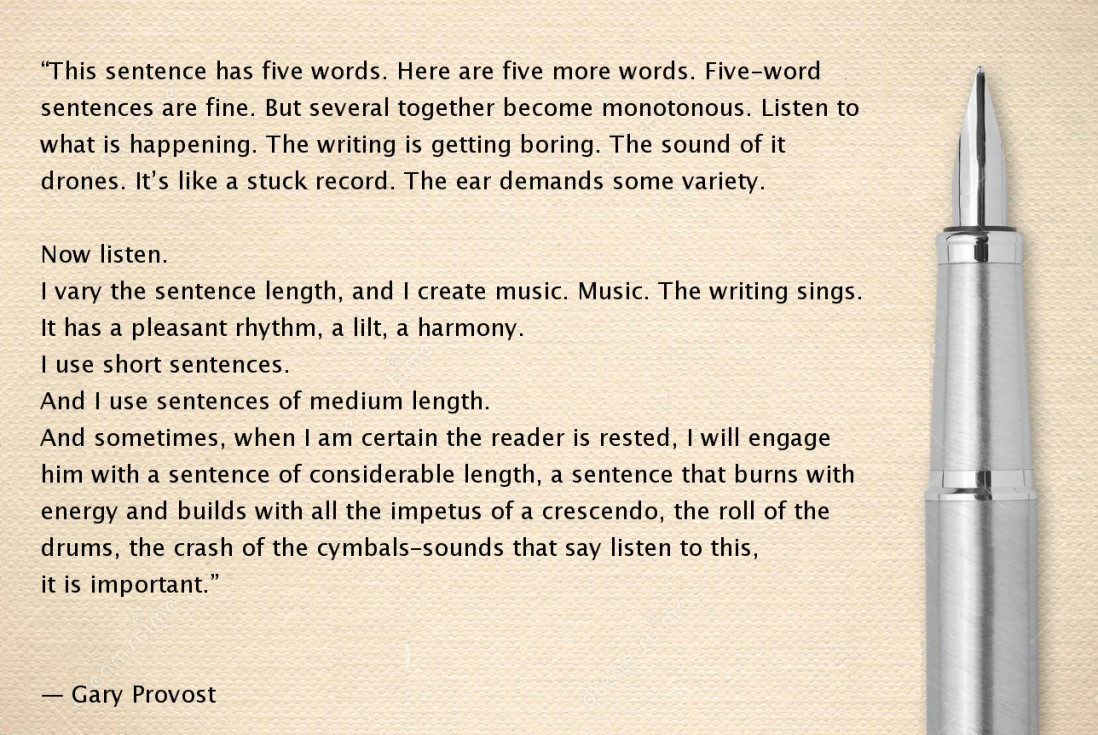 Well, the same goes for the stories themselves. If they are just dark scene after dark scene with nothing separating them, they can get just as tedious as five word sentences. You need variation.

5. You learn that even villains have depth.

By now, most of you have learned that making a protagonist with absolutely no flaws is boring. So we make our protagonists lazy, have addictions, anger issues, quirky, clumsy, or whatever the case may be. We want our main characters to be likable, but also want people to be able to relate to them. It’s easier to relate to a protagonist if they have those flaws, because we do too. However, most people make villains very one dimensional. You know, evil for the sake of being evil? There is no story there, no context, just an evil person that has set out to destroy the universe. The reader doesn’t know why, and the only reason that character interests them is because they can relate to the protagonist and want to see how things play out for them. A lot of people kill their villains at the end of the story so they feel like there is no reason to build a lot of depth to them since they are just getting rid of the character anyway. However, that just makes a semi interesting story. If there is a lore for why the person is evil, and hints are dropped throughout the book, it makes people just as interested in the villain. Finding out his flaws and why the villain is evil in the first place, makes the villain easier to relate to. That’s when you see people saying that the villain is their favorite character. Your readers may not even relate to your protagonist as much as they relate to the villain, and they may get excited every time your villain comes across their pages. A good example of this is Batman. Batman is just a template for a gloomy, edgy, superhero that skulks around at night hunting for bad guys. He isn’t terribly interesting, and would be kind of boring on his own. The Joker however, has a ton of depth. Honestly, if you told me The Joker had more fans than Batman himself, I wouldn’t be shocked. He is easy to relate to because we all have a bit of a crazy streak, don’t we? Plus, you actually feel sorry for him. A good story will make you feel for the villain and the hero. It will make you see things from both perspectives. It will show you how easy it is to either be a hero or a villain, it’s all just a matter of circumstance, and how the dice fall. We can relate to both, because while we all have good intentions, none of us are pure.

Yes, we’re talking about lore again. Let’s say you write a story about a fictional world, and you have your characters set up in a fictional land. Write the geography for the lands that border it. Write the history of the people that inhabit these places. Name drop them through book one, and when you get to book two, you’re not taking a shot in the dark. You will know where your people would go based on their personalities and histories. So, when your characters go to a land that was just casually discussed in book one, when readers see it in book two, it’s almost like a reward. It also encourages them to read book one again, to find the easter eggs and references to book two. It also shows that you took great care in planning the series. Nothing happened by accident. Also, there are no plot holes. Easter eggs are basically a reward for super fans, and people that pay attention. They are like inside jokes for your readers.

0 Replies to “How gaming has made me a better author.”