Bizarre Interviews with Kyle Perkins-Special “I missed a week” edition.

So, I missed a week a couple weeks ago, so this is a special one that I am plugging in before my bizarre interview with Aaron Speer on Sunday. Hope you guys enjoy!

This week we have J.N. Chaney!

Question 1: So, what kind of stuff do you write?

Question 2: I love dystopian. What’s your favorite book? Also, which of your books do you dislike the most, if you had to choose. Gun to head.

My favorite book is Ender’s Game, which I have read many times since I first picked it up over fifteen years ago. Out of all my books, I’d say my least favorite is my collection of short stories. I prefer writing novels, so those were a challenge.

Question 3: So, are you married?

No, I’m living the good old bachelor life. I don’t think I could afford to be a full-time writer if I had a family.

Question 4: So what you’re saying is, being a dystopian author lands you tons of ass?

Lol not really. I never leave my desk or go outside. I’ve been chained to this chair and made to toil by demanding readers.

Question 5: Being chained to a chair doesn’t sound bad. I never go outside either, though. There are people out there. Fuck that noise. So, being a male writer, how many unsolicited vag pics do you get on a weekly basis?

None that I know of lol.

Question 6: They must only send them to me. Probably because I look like more of a “seedy element.” So, since you write dystopian, I assume you dwell on end of the world scenarios a lot. Are you like me in where you have “What you would do in this situation” simulations in the shower? Like, what you’d do when shit hits the fan?

Yeah, sometimes. I think about technology mostly. My books are three hundred years in the future, but society collapsed about two hundred years before that, so the technology is roughly a century ahead of what we have now. I try to come up with what I think would be a natural evolution of what we’re currently doing. For example, there’s a machine in the books that was built to produce energy by drawing heat from the air, which is then used to power a facility. When our heroes find an entire field of them, the land has been covered in frost after two hundred years of these machines being constantly active. As it turns out, we’re working on something just like this today. So, I think about stuff like that more than anything.

Question 7: HA, NERD! Jk. I am the same way to be honest. I try to be as plausible as possible so people can’t call me on my shit in twenty years. “Hey, you remember when you thought we’d have laser eye bots patrolling the city by 2018? Bahaha” Anyway, what’s a worse scenario, zombie apocalypse or robots becoming self aware, replicating and becoming our masters?

Well, zombies are pretty easy to deal with in reality, so if that ever happened, we’d squash the problem in a day. Robots learning to self-replicate is far scarier. They could potentially build other robots that are smarter than they are, which would create a never-ending evolutionary path to dominance. We’d become like ants to them before long.

Question 8: Well well. Someone knows their stuff. That’s refreshing. So, by the time we are building Dyson Spheres and uploading our consciousness to immortal machine bodies, do you think our planet will have long been dead? Also, if you had the option now to upload your being into a virtual reality, or into a machine, would you do it? You’re not dying or anything, absolutely healthy, but you have the option now and only now. Some say your original body dies, and that’s the actual you dying and the new one is simply a copy, but what are your thoughts?

Well, I don’t know if humans will last long enough to get to the point where we’re building something like a Dyson Sphere. We’re so self-destructive that sometimes I think we’re doomed. As for the other question, I’d go with virtual reality, but only if I have the option to end the simulation (and my life). I imagine you’d get bored, even with endless possibilities, after a few hundred thousand years.

Question 9: I wish I could live in a time when we are harassing the energy of entire star systems, but I think by that point the fun and magic of the universe would be gone. You know, we’d have most things figured out, and would just be working for a collective, almost like hive work. I think our primitive thoughts keep things interesting still. So, in this simulation, which famous person would you be banging?

Wow, that’s a tough question. I guess I’d say my girlfriend, because that’s always the right answer, isn’t it?

Question 10: Scarlett Johansson, got it. Do you think in a simulation with every fantasy and need met, your girlfriend would choose to be with you?

Oh, I doubt it. If you saw the two of us, you’d wonder what she was doing with me. That woman is gorgeous.

Question 11: Haha. Well way to go man, pulling in the hotties for all us nerds. You’re officially my hero. You have discovered the elusive vagina. So, in a zombie apocalypse.. You’re in front of Negan and he has Lucille… He says “pick one,” and gestures towards your girlfriend and mom, who do you choose to sacrifice?

Oh, man, I don’t like this scenario. I don’t think I could make a call like that. Negan would probably kill me instead after I stalled too much.

Question 12: Wuss, you just don’t want to deal with the wicked side eye from your mom or gf. lol. If you had to choose a traveling mate, would you rather have Negan, The governor, or one of those cannibals?

Definitely Negan. He seems like he’s less crazy than the Governor. More hardened and willing to do whatever he has to do, but not mentally unstable.

Question 13: If you had to bang one, who would you pick?

Haha well I don’t know, because they’re all gross. Lol

Well yeah, who wouldn’t be? No, I’ve never had an attraction to any guys, attractive or psycho cannibal lol

Question 15: Well, thanks for being a good sport! Last question. If you HAD to revive one, would you revive Hitler, Ted Bundy, or Pol Pot?

Oh, fun! Well, someone actually made a movie about reviving Hitler. It’s a comedy called Guess Who’s Back?

Hitler revives in the modern world and it’s hilarious because he has no idea what is going on.

So, you have to imagine he’d be running around acting all Hitler-like, but people would just roll their eyes at him. “There goes that Hitler guy again, always talking about invading Poland. What a nut!”

He is working on the third book in his “Variant Saga” right now, which releases later this year. Readers can get started on it with “The Amber Project”, followed by “Transient Echoes.” 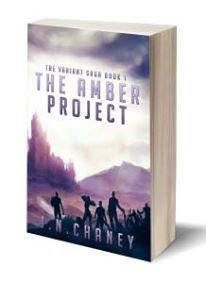 Find out more by clicking here!

9 Replies to “Bizarre Interviews with Kyle Perkins-Special “I missed a week” edition.”